be careful what you put into that head, for you will never get it out!

I caught the second half of a session on teaching climate change to underclassmen and secondary students. The issue is a complex one, as are all scientific topics, but the politicization brings it up by an order of magnitude. As it does, I guess, with any topic.

I have strong opinions on issues of civil liberties, economics, the environment and science in general. I like to consider myself pretty well informed on most topics, but on science and the environment I’m kind of paid to be an “expert” (at least from the point-of-view of the layman). In class I make every attempt to direct the conversation toward process: how the systems work, what we know about driving and mitigating forcings, how we determine what happened in the past and to what degree of certainty.

If a student asks me what my opinion is on the death penalty my standard response is “buy me a beer after the final exam and I’ll tell you.”

One of the two greatest insults a student can throw at me is that I’m only presenting my opinion (the other is that my ability to understand logarithms is some genetic quirk, that doing math is “easy for you.”). Where I work is pretty politically conservative, though not nearly so much as people think.

I haven’t run into too many students who challenge me on climate science, because those who get all of their science information from Fox News and Rush Limbaugh, are a bit intimidated by an actual science class – I think they’re afraid that if I dismantle their misconceptions they won’t have anything upon which to hang their opinions.

I get mostly ambiguous questions (Hasn’t all of that evolution stuff been proven wrong? I heard that we never landed on the moon). And every semester, without fail, at least one student who wants to “SAVE” me – because, you know, someone who teaches that the Earth is older than 6010 year, and that humans have not been around for very long, and that the chemical and physical systems that govern its operation are incredibly complex but, nonetheless, largely understandable by our measly brains must be a non-believer. And a non-believer in 21st century clearly has never been exposed to Jesus.

So what these few students get out of my class is that I’m the ignorant one.

But you know what? A majority of them can, at the end of the semester, explain why the Earth experiences seasons that are inverted in the other hemisphere, and why the temperature of the troposphere gets cooler with altitude.

So I’ve got that going for me, which is nice…

I could see it happening to one of the many Red Sox fans at the airport, but...

Well, I wanted to blame the lost bag on Denver’s state-of-the-art computerized baggage handling system, which made the national news, what, 10 year ago because they still couldn’t get the bags out on time. As it turns out though, it all comes down, as always, to human error aided by bureaucracy. Someone didn’t pull my suitcase off the plane, so it continued on to Baltimore, where it sat for 5 hours before someone scanned it into the system, and now it sits waiting for a flight tomorrow, so it will (hopefully) arrive at my hotel sometime late in the afternoon. I think United owes me back some of the $5 billion we bailed them out with after 9/11.

Of course I’ve never lost a bag before, so this was largely probability catching up with me. As I often say at such times, no one is bombing my house and family so shaking my fist at the heavens is pretty inane and self-centered. So I can just blog about it…

Anyway, it cost me about an hour, which was just enough that I entirely missed a special panel on new things happening with Google Earth (thanks Andrew, for filling us in).

Have some fire, Scarecrow!

We just returned from a weekend trip to Death Valley. Beautiful fall weather and we avoided ruining several sets of shocks on the road to Racetrack Playa. I'll write about the trip soon, but on the way home Sunday night we passed through the origins of several southern California wildfires. The Santa Ana winds have been as wild as I ever remember them, with 100 mph gusts in places. Between Cajon Pass and Corona we passes 3 or 4 big rigs that had been blown over. Passing through the Santa Ana mountains we came across the Santiago fire in its infancy: 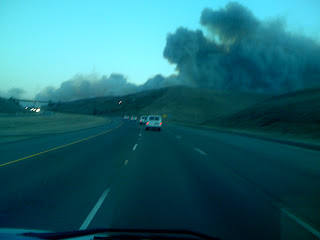 This one began near Silverado Canyon, where I had a field trip planned two weeks from now. Five minutes earlier and we'd have been driving through as it was crossing the road. As it happened we came upon a closed road and had to make our way south along the coast. So far, 20 or so homes have burned in Modjeska Canyon, and several of my students have been evacuated. They closed the school down on Monday afternoon; driving to school the winds and gray sky made me think of a volcanic eruption.

By the afternoon both yesterday and today the sky overhead was relatively clear though the smell of smoke remained. To the south the fires in the San Diego area are producing a thick, dark brown smoke that hangs on the horizon. The smoke to the north (most from the Santiago fire) is thinner and the sky reminds me a lot of the pre-clean-air-act sky from when I was a kid, though this doesn't make my eyes burn as much.

The image below is a sunset image taken this afternoon at Aliso Creek in southern Laguna Beach. I missed the cherry-red sun by a few minutes, but the smoke here is from several of the LA fires in addition to the Santiago fire. 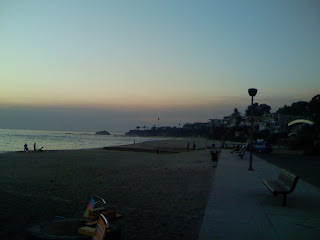 Below is an image taken on Monday by NASA, showing the smoke from various fires being blown out to sea. 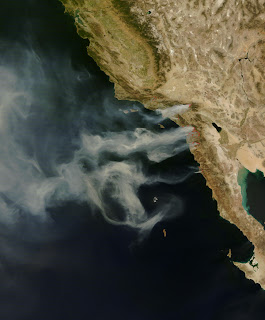 The chaparral covering the local hills and mountains is uniquely well adapted to life with fire as the climate is not conducive to the kind of bugs that promote the decay of dead vegetation. The leaves contain oils and resins that allow them to hold moisture. Many of these plants are more flammable than Christmas trees or eucalyptus. Unfortunately, the 21st century humans who live adjacent to the chaparral have not adapted to the fires as well...

UPDATE (8:40 AM): A couple of new fires on Camp Pendleton to the south have closed I-5 between LA and San Diego, and some parts of the Marine base are being evacuated. The smoke is much heavier over campus than it was on Monday when the campus was closed, but the Santa Ana winds are largely gone.

Also, I corrected some spelling erorrs...

Posted by jrepka at 7:51 PM No comments:

We are all doomed.

We live in a 5 km thick layer of vapor at the surface of a 12,750 km sphere that, so far as we know, is the only oxidizing environment in the universe.

There’s aridity in Arizona, tornadoes in Texas, flooding in Florida, hurricanes in Hawaii, nor’easters in the north east, winter storms in Wisconsin, volcanoes in Vancouver, and in California the crust is moving simultaneously in more directions than the Governor.

But what are the alternatives? Our atmosphere and hydrosphere are, molecule by molecule, atom by atom, leaking off into space, and an Earth with no earthquakes and volcanoes (i.e., a cold, tectonically dead Earth) would no longer replace those gases (see Mars, Moon, Mercury, basically all of the M-worlds). Life needs an active world, one with outgassing volcanoes.

Storm activity not only brings water to the middle of continents, it is part of the processes that bring some thermal equilibrium to the planet. Greenhouse heating turns the atmosphere over, moving water vapor from the oceans to the continents, heat from the tropics to the poles, and prevents those pesky 250 degree day-night temperature variations. For planets with life, look for clouds and rain and storms and high winds. Just ask the Venusians.

Life is, and thrives on, disequilibrium, whether it is chemical, thermal, or gravitational. All of the universal plots to kill us involve, in one way or another, a reduction in disequilibrium and an increase in entropy.

Equilibrium is calm, quiet and deadly.

Looking at Zoltan's meandering channels took me back to my first class in geomorphology, and I've had images of area:slope ratios, shear stress, the law of the wall, and ::shudder:: Reynolds numbers (OK, the equations, not the images) running through my head for the last few days.

While scanning around, looking for potential sites that might present enough of a challenge for the brilliant members of this community I came across this NW-SE drainage. The beauty of the image, the sharp angles of the hills and the broad curves of the channels, just blows me away (notice that there's even a lovely little stream capture at the center of the image).

I had a natural history teacher once tell me that the more I understood the details of the natural world the less I would notice its beauty. I knew he was full of shit at the time and every time I go into the field I'm reminded again how incredibly wrong he was. And other geologists I meet seem to have the same sense of the numinous when looking at landscapes.

So without further ado I present you with WOGE #59: 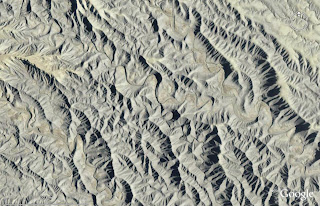 All the usual boilerplate, including the Schott Rule, are hereby invoked. Winners will have their names carved in the digital plaque and have the honor of hosting #60. Post time is 10:45 PDT.

Update (10/9): These rocks were deposited in a large inland sea and contain both ammonites and inoceramus...