I haven’t rock-blogged in a while, and while putting together a lecture on stratigraphy I came across this photo from a field trip to the southwest last summer. 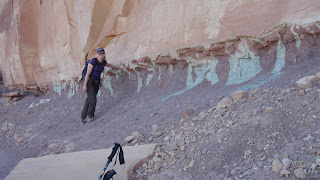 This was taken at the beginning of a hike along the Frying Pan trail (well-named if you walk it in late June) in and shows the contact between the Chinle formation and the Wingate Sandstone (above). The photo scale is Rachel, a former student who came along on the trip as a volunteer/TA. The Owl Rock member of the Chinle in this region consists mostly of slope-forming siltstones and shales representing an inland delta.

, especially in the southern deserts, is known for the bright red colors of certain formations, a result of deposition in highly oxidizing terrestrial environments. The upper member of the Chinle here is no exception, and I had spent part of the previous evening explaining to several students about the oxidation states of iron. Imagine my surprise and delight when we climbed up to this contact and found these green veins extending several feet into the mudstone.

These veins represent mudcracks that formed as the shales and mudstones dried. As they opened up they were filled with organic debris that, as it decayed, created a highly localized reducing environment and turned the red clays green. Some of the cracks also contain veins of gypsum.

The image below is a view of mudcracks in the same (or a similar) surface from above. It's not as pretty or instructive as the image at the top, but it is clearly the same effect, and a student spotted it first. It's always a nice feeling when a student notices and points out the geologic features to me... 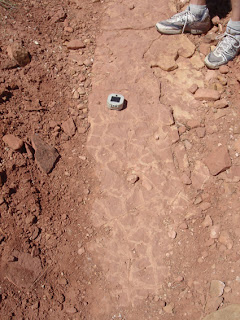