Where is my vote? 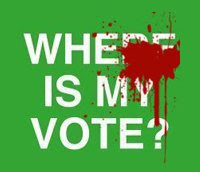 Like many people (certainly not all) I've been following the situation in Iran much more closely than the situation in South Carolina/Buenos Aires.
The Iranian government is clearly taking its cues from the Chinese government of 20 years ago. For all of the talk about new media (will the revolution be Twittered?) the degree to which Khamenei will be successful will depend largely on how broad-based the reform movement is -- we know that the "Sea of Green" is deep, how wide is it?

Hopefully we are about to see a significant weakening of the hard-liners in the Iranian government. Sooner would be better than later -- but this could be the beginning of a long process. The regime has the firepower and is clearly ruthless. How much public support are they sacrificing for short-term control?

All that the new media can do is attempt to counter government propaganda about foreign influence. Many Iranians have positive views of Americans yet are suspicious of the motives of the American government. Can you imagine if the British or the Chinese or the Russian governments had officially endorsed either Obama or McCain last year? Or if they had made public statements supporting one side or the other in the recounts following the 2000 election?

It is ironic that this is all about holding on to a presidency that only carries as much actual power as the Supreme Leader chooses to allow...

I was touched by the video of the death of Neda last week -- it is ironic that we are still arguing over the release of images that present the US in a more critical light -- but the events of today hit home as I read the Twitter updates of Persiankiwi, who has been one of the most prolific reporters from the inside of the protests and marches in the past two weeks. I don't know if the reporter/reporters known as Persiankiwi have shut down for the evening, or if he/she/they have been arrested or worse but these last few updates put a lump in my throat: