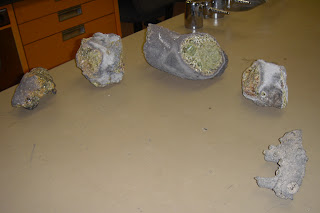 For show-and-tell today I brought this fulgurite specimen, which I unfortunately did not collect myself.

In 1998 I took a group of intro geology students on a trip to in southern , and while we watched a storm play out over the I gave an impromptu lecture on convective thunderstorms and lightning. 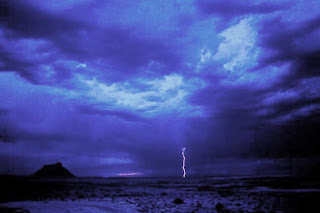 Lightning is the sudden release of huge static charges that develop in convective storms due to rapid vertical movement of air. No one really understands the details of the transfer of charge (the primary carrier of charge appears to be small fragments of ice crystals), but typically the cloud becomes a 5-10 km high capacitor with negative charge concentrated near the base. When the stress becomes too high the cloud discharges very rapidly. Globally there are roughly 5000-10000 lightning discharges per minute, mostly in the tropics, of which roughly one third strike the ground (the rest occur between clouds or within the cloud).

A cloud-to-ground strike transfers billions of joules of energy, most of which dissipates in the atmosphere (heating the air to tens of thousands of degrees and creating visible as well as infrared light that ranges down into the radio spectrum). In the end only a tiny amount of the original energy is delivered at the point of impact, but anyone who has observed or experienced the results will testify that it is sufficient.

Since the cloud is looking for the easiest path to the ground, it is most likely to strike objects above the local base level, as trees, houses, and people (especially those holding lightning rods golf clubs) are much better conductors than relatively dry air.

The subject of fulgurites, or fossil lightning, came up and I explained that quartz has a melting point of about 1600 degrees C, a temperature easily achieved in the near surface, though in very wet soils the charge can be dissipated pretty rapidly. The best examples therefore result when lightning strikes the ground directly in an area where the soil is dry and is thus not a good conductor.

Quartz sand works particularly well as it conducts heat as poorly as it conducts electricity. This prevents charge from dissipating rapidly, so the bolt can travel through the ground for several meters, fusing sediment to glass and vaporizing all of the volatile components. Some of the best examples of fulgurites are discovered in dune fields, where dry unconsolidated sands subsequently are eroded by winds, exposing the fused structure. Unfortunately fulgurites are quite fragile and tend to crumble when excavated.

One of the students on that trip was visiting relatives in Temecula later that year when she saw lightning strike the ground a few hundred feet from her back door. She got her husband to help her dig up the yard after the storm had passed, and she brought us a shopping bag full of this broken chunks of this fossilized lightning. The largest piece here is about 25 cm long and 8 cm in diameter and was found less than 40 cm beneath the surface. 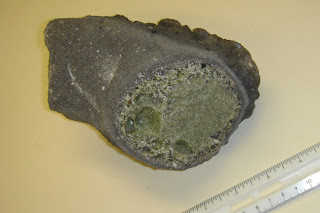 The soil was very sandy in this location, and was fused to glass at temperatures exceeding 2000 degrees C. You can see what a poor conductor of heat this material is, as it transitions from glass to barely altered sand in less than a centimeter. There is a general relationship between current and diameter indicating that this sample was created by a fairly powerful lightning strike.

The moisture and organics flashed to vapor, leaving lots of vesicles. The explosive expansion of the volatiles can create hollow tubes down the center of the structure, pushing the molten (or melting) sand outward. There is a common misconception about these hollow tubes that they represent a zone where temps were high enough to vaporize quartz, but this is not true.

The second piece is from about a meter beneath the larger sample and is barely more than a glass tube. You can see the charge branching off from this piece in several directions simultaneously. 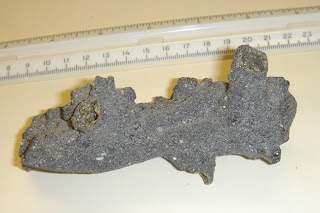 I've found that, in addition to being great samples to pass around when I’m talking about thunderstorms in class, fulgurites are great ringers to slip into an igneous rocks practical exam.

Wow. Those are really cool. I had a student ask how to recognize a fossil lightning strike earlier this semester, and I didn't know - but now I do. Thank you!

That is a great story behind your fulgurite. In the February Geology is a paper about isotopic analyses of the gases inside fulgurite bubbles. They really are fossils.

Thanks Andrew, I'm going to look that one up...