I've chosen to share an image (okay, several images and a video) from the field locale for my dissertation, an area already familiar to many geobloggers. 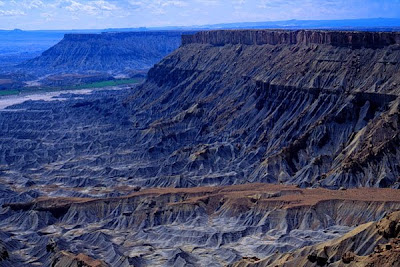 38° 24' 14"N; 110° 56' 15"W; bearing 200°
After sorting through several images from this set, I've chosen this picture taken from the eastern peninsula of North Caineville Mesa, just east of Capitol Reef National Park in southern Utah. We're looking south toward the Fremont River floodplain (green) and South Caineville Mesa (opposite the river). The Henry Mountains are just out of frame to the east, and the horizon slopes upward to the west into the Aquarius Plateau. The pediment in the foreground is an inverted stream channel filled with sand and boulders from the cliffs. The photo below, taken from the floor of the badlands, looks in the opposite direction toward the mesa . 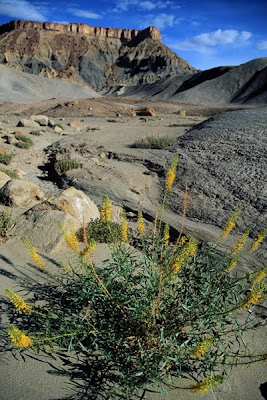 38° 23' 53"N; 110° 55' 18"W; bearing 330°
The Cretaceous Mancos shale dominates the images here. The mesas are topped by the Muley Canyon (formerly misnamed Emery) sandstone member, overlying the Blue Gate shale that forms the badlands. The Blue Gate member represents an interior sea and is rich in bentonite -- I've done some unintended camping here when caught in late summer storms, and spent the better part of a morning excavating Blue Gate shale from the wheel wells of our field van. Its usefulness in lining water wells, as an absorbing agent, and in drilling mud becomes obvious when you've seen a half-inch of wet, swollen clay separate a six inch puddle of rain water from bone-dry clay below.

I'm told it contains shark teeth, oysters, ammonites and even mosasaurs, but I spent 6 weeks a year working here for 4 years and never came across so much as a snail (of course the first time I brought students into the area one of them found one of the most beautiful ammonites I've come across in the field).

I came out here with my adviser, Bob Anderson, intending to look at incision rates in the badlands by doing cosmogenic exposure dating of the sandstone caps on the badland ridges and hoodoos, but the project eventually moved out of the badlands and onto the strath terraces along the Fremont River and an attempt to correlate terrace formation with climate cycles (again using cosmogenic radionuclides). My colleague Greg Hancock did a big portion of his thesis looking at incision processes on these badlands channels, including installing acoustic sensors to detect the rare flow events: 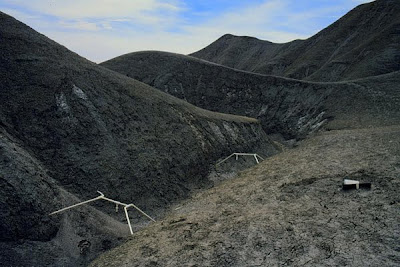 38° 23' 18"N; 110° 55' 52"W
I was going to leave you with this photo of Factory Butte, with the Waterpocket fold in the background but I remembered this clip from the dailies of the never-completed movie "Dark Blood," a scene shot several days before the death of River Phoenix... 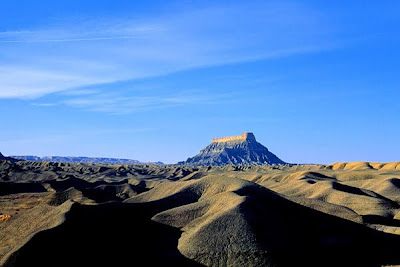