Garry at Geotripper is posting a beautiful account of the history of the Colorado Plateau, based on his recent field course. In his most recent post he discussed the formation and subsequent erosion of much of the Temple Butte Limestone, but laments that he had no good photos. I offer this one for illustration. 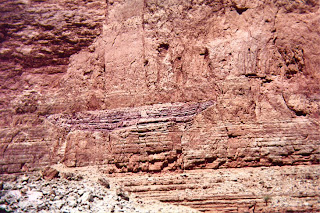 Exposure of Temple Butte in south-facing wall in morning light near mile 45.
The erosion that preceded the deposition of the Redwall Limestone was greater in what is now the eastern portion of the Canyon, thus in many places the Temple Butte was removed entirely and the Redwall sits directly atop the Muav Limestone. The scraps of Temple Butte that are found here exist as filled channel cuts. Fortunately in the eastern part of the park the Temple Butte Limestone has a distinctive purple tinge that makes it stand out, especially when the light conditions are right.

In 2002 I was lucky enough to spend 17 days on the Colorado on a private trip organized by some friends from graduate school. If you've never had the chance to spend two weeks floating the entire canyon with a group of geologists, my recommendation is that you drop everything you are doing right now and focus on making that happen! Of course that's my opinion, the 2-3 people we had along who were not geologists might differ (they would be wrong). 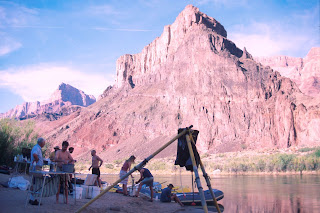 Group of (mostly) former Banana Slugs setting up camp just below Nankoweap Rapid (mile 53)
Posted by jrepka at 10:17 AM