Note: I originally wrote this post in 2010, the 65th anniversary of the bombing of Hiroshima -- I have updated it here to fix some broken links. 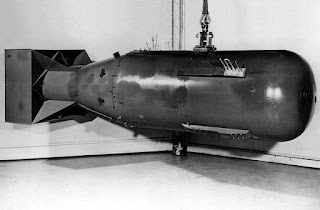 "We knew the world would not be the same. A few people laughed, a few people cried. Most people were silent. I remembered the line from the Hindu scripture, the Bhagavad-Gita; Vishnu is trying to persuade the Prince that he should do his duty, and to impress him, takes on his multi-armed form and says, 'Now I am become Death, the destroyer of worlds.' I suppose we all thought that, one way or another."

It was only the second nuclear device detonated, after the Trinity test on July 15, and was unique in several respects: it was the first uranium weapon ever exploded; and the only gun-type" mechanism ever used -- both the Trinity device and the "Fat Man" bomb dropped several days later on Nagasaki were implosion-type weapons that used plutonium-239 as their fission target.

This type of firing mechanism had not been tested in a nuclear device, but it was such a simple mechanism that failure was considered a very low probability. It would only work with uranium though -- The fissile plutonium that was being manufactured in Tennessee and in Washington state fissioned too quickly to be combined over 0.004 seconds, so plutonium bombs required a much more complex implosion mechanism. This is the design that was tested three weeks earlier in the New Mexico desert, and was detonated on August 8th over Nagasaki. It was nicknamed "fat man" because of its spherical shape.

Spontaneous fission in uranium is rare -- a mass of this size will produce only a few hundred neutrons per second spontaneously; most of these neutrons will go flying out of the mass with no effect, but a few will managed to bounce around the interior long enough to slow themselves down to thermal velocities ("slow" neutrons). 235U is somewhat unique among naturally occurring elements in that is can be induced to fission by the absorption of a slow neutron.

The extra neutrons are absorbed by a few 235U nuclei, causing them to wobble, destabilize, and split apart, creating two nuclear fragments roughly half the size of the original nucleus plus a couple of extra neutrons. These two neutrons are absorbed by two other uranium nuclei, causing them to split and generating four more neutrons, and so on... the reaction expands geometrically at incredible speeds, going through eighty generations of induced fissions in a microsecond. While this is occurring the bomb falls only an additional few inches.

Though the sum of the nuclear particles post reaction is the same, the sum of their masses is smaller by just over 1% -- about 600 grams of the material in the reaction is converted into energy by Einstein's equation, E=mc2. Some of this energy goes to heating the bomb components, but most is released in the form of gamma rays and X-rays.

There is a blinding flash as the air immediately around the explosion is heated to millions of degrees. The expanding fireball reached a diameter of just over 1000 feet, cooling as it expanded, dropping to a temperature of only 4000°C at its outer edge. It is as if a new sun appeared in the sky, hundreds of times larger than our own sun. The superheated air causes materials at ground level to spontaneously burst into flame -- people, animals and plants are vaporized, leaving behind nothing more than carbon residue within a mile of ground zero. 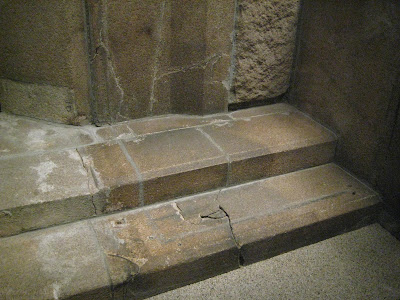 The rapidly expanding air also generated a pressure/shock wave, a blast of wind moving outward at greater than the speed of sound. Within 2 miles around ground zero structural damage is near total. As this shock wave passed, pressure dropped momentarily to values close to the vacuum of space. The debris generated by the destruction also served to add fuel to the fires within this zone.

Though the secondary radioactive products of the fission reaction are dangerous, an air blast such as this one causes much of the physical debris of the bomb to dissipate through the atmosphere. There is however, a significant flux of gamma and neutron radiation at ground level. Immediate casualties due to radiation exposure were few; more victims died soon after of radiation sickness; the highest rates of casualties came later from increased rates of leukemia as well as other forms of cancer associated with radiation exposure.

By some accounts, Hiroshima was chosen as a target at least partly because it had been spared conventional bombing up to this point -- making it a "clean slate" for the study of the effects of the bombing, both during and after the event. Most of the data about the explosion itself was collected by a radio transmitter dropped by a plane flying in formation with the Enola Gay.

It was estimated at the time that 70,000 people died in the initial blast from the atomic bomb. By the end of 1945, deaths due to injuries, burns, radiation and other causes increased the death toll to 120-150 thousand. Some estimates put the number at 200 thousand by 1950. At least one study claims that 1 in 10 cancer deaths in victims since 1950 can be attributed to the bombing.

Though it has been 65 years since devices like these have been used as weapons, the ability to refine fuel (either enriched uranium or plutonium-239) has come within the technological capabilities of just about any country on Earth, and the design and manufacture of a working device is well within the abilities of a group of engineering grad students.

This video "1945-1998" represents the work of Japanese artist Isao Hashimoto and is a document of all 2053 known nuclear detonations on Earth during those years, shown by location at a rate of 1 month = 1 second.