The Perseids are one of the most watched meteor showers, partly because they generally put on a fantastic show and partly because they hit their maximum intensity every year in mid-August, when staying up and partying all night in the middle of the desert is relatively comfortable (the Leonids can put on a much bigger display but they peak in mid-November, so -- come on!).

I was going to do a post about where to go to watch them, when the peak times are (tonight and tomorrow are best, but it should be great this weekend), what to drink while you are watching, etc., but I’ll leave that to the actual astronomers and others...

The Perseids are most commonly associated with comet Swift-Tuttle, a short-period comet that reaches perihelion every 133 years. As the comet approaches the sun, sublimating gases erupt from the surface in huge geysers and carrying small grains of solids with them. These silicate particles can range in size from silt and sand size up to (in the rarest cases) pebbles and small cobbles. This “atmosphere” of gas and grains, though quite tenuous, can puff up to the diameter of a planet (or even the sun) around the comet’s nucleus, which may be as small as a few kilometers across. This can make some comets, under ideal conditions, among the brightest objects visible in the sky. 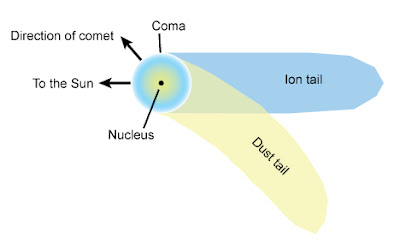 Comet Hale-Bopp (1997) The blue tail is the ion (gas) tail and points radially away from the sun. The white tail is the dust tail and it curves to indicate the general direction of motion (right to left, tilted slightly toward the horizon.
The silicate particles of the dust tail, also under pressure from the solar wind, are affected more strongly by the sun’s gravity. The largest of these particles will fall into a solar orbit that more or less mimics that of the comet. These particles, known as meteoroids, can range in size from sand grains to pebbles to medium-sized cobbles, and the stream of meteoroids is known as a “dust trail” (as opposed to a “dust tail”).

The lifespan of any short period comet is limited -- each time it approaches the inner solar system it boils away a bit more, leaving fewer volatiles and smearing more of these meteoroids along its orbital path. If we are lucky enough, the Earth will cross this orbital path once or twice per year.

Earth moves at close to 30 km/s around the sun, and the portion of the dust trail in our path is moving at close to this speed (15 km/s to 45 km/s). So, depending on whether a meteoroid approaches us in retrograde or in direct it may hit the upper atmosphere at anywhere from 15-75 km/s. Interestingly, since we are moving counter-clockwise around the sun (viewed from the north pole) and rotating in the same direction, meteoroids we encounter closer to sunrise typically move faster than those we encounter near sunset.

It is a common (and logical) assumption that friction with the atmosphere will heat up the meteoroid. However, the heat is largely generated by the rapid compression of air molecules in front of the speeding particle. This process is called “ram pressure,” and this heat is largely responsible for heating the meteoroid, causing it to glow, melt and evaporate. Perseid meteors
The grain becomes a meteor -- a “shooting star” -- when it is hot enough to become incandescent, usually at between 60 and 100 kilometers. As it streaks across the sky it evaporates, and the length of the trail depends on the size of the grain. Most meteors are no larger than a sand grain: pebble- and cobble-sized meteors, called “fireballs,” put on a much more impressive show, tumbling and shedding visible mass as they streak across the sky and are brighter than any object in the sky other than the sun or moon. A fireball meteor
The Perseids are so called because they seem to radiate from a point located in the constellation Perseus. This is, of course, because we encounter the dust trail as we are moving in our orbit in the general direction of this constellation. This is the same effect as driving down a dark desert highway at night; the bugs generally are scattered and moving in random directions, but from the point of view of someone in a fast moving car, those bugs you encounter seem to radiate from a single point in front of your car.

At the peak of the shower (in the last few hours approaching sunrise) you may see up to a meteor per minute (in much more rare meteor storms you can see several or even dozens of meteors per minute). In the first few hours after sunset you have the best chance of seeing a few glowing fireballs, since Perseus is low in the sky and visible meteors will be hitting the atmosphere at a very low angle.

Most people are aware that you don’t need a telescope to watch a meteor shower, but a decent telescope (or, in a pinch, a good pair of binoculars) will be useful since Jupiter is close to opposition now and will be visible all night. Also, the other four naked-eye planets (Mercury, Saturn, Venus and Mars) are clustered together near the crescent moon. Tonight (August 11) Mercury and the moon will set simultaneously -- tomorrow it will set between Saturn and Venus, and on Friday night it will set after Mars.
Posted by jrepka at 11:27 AM