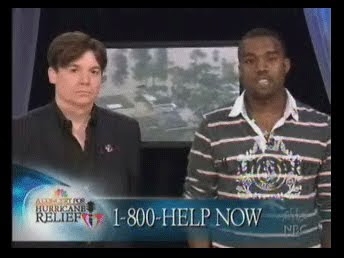 President Bush has apparently written and stated that the worst moment of his Presidency was when rapper Kanye West, in response to his lack of response to Hurricane Katrina, said of him: "George Bush doesn't care about black people." 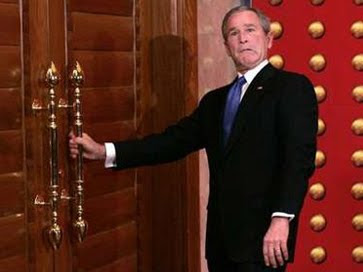 I was taken by the total narcissism of this -- that in a Presidency that included almost 3000 Americans killed on 9/11, almost 2000 Americans killed in Katrina, a war in Iraq that, no matter how justified he felt in invading, led to the deaths of over 100,000 Iraqis over 5 years, a "war on terror" in which we've invented a new classification of POW that allows us to hold prisoners indefinitely and to torture them -- that the most "disgusting moment" was that someone said something bad about him.
Of course, he allowed himself to redefine what was said, claiming that Kanye had really called him a racist. He told Matt Lauer that "My record was strong I felt when it came to race relations and giving people a chance." See, he doesn't hate or fear black people. But that doesn't address the original statement. Does George Bush care about black people?

I believe that he, like all of us, cares about the people around him, people he knows personally, no matter the color of their skin. I also believe that his empathy tends to decay quickly with distance. Bush doesn't care about black people -- or anyone else who isn't part of his inner circle, especially middle class and poor people.

But the word "racist" sticks with me. The problem is that perhaps the conservatives are right -- it is, like Nazi, fascist, Hitler, socialist and "islamofascist" (a made-up word that has the dual properties of not making any sense and instilling great fear among the ignorant), it is so overused that it is losing all sense of meaning.

Are there racists among the Republicans? Are there sexists? Homophobes? Religious bigots? Yes to all of these, but the same could be said about Democrats and independents.

It is also true that the Republican Party, whether racist or not, seeks to exploit whatever racist, sexist, homophobic or religious bigotry they can find in the electorate. 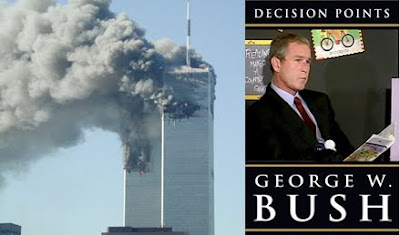 As for former President Bush, I am willing to stipulate that he probably does not hate or fear any group because of its uniqueness any more or less than the average American.

In terms of his policies toward all of these groups however, and the policies of incoming group of Republicans, I believe a line Bill Maher used when referring to Dick Cheney applies:

"He doesn't hate children and puppies. They're just in the way."
Posted by jrepka at 11:18 AM